This recipe is from our church cookbook and it makes me salivate to think about.

It is super-duper easy too, and that is always a good thing when you’re in a hurry.

Sometimes I make extra chicken and freeze it in a Ziploc bag so I can whip these up again lickety-split when I need/want to.

First you cook three or four large chicken breasts any way you like.  I usually sauté mine in garlic and onions until they shred apart (more on how easy that is in the middle of this post), but you can boil it too if that seems easier.  It’s also super easy to just use the rotisserie chicken from Costco.

In a bowl, mix up the marinade:

Mix in the marinade with the cooked chicken:

Let the chicken soak in that marinade in the fridge for a little while…overnight would be ideal, but I’ve done it before without letting it marinate and it’s still pretty darn good.

(If I made enough chicken mixture to freeze some, I do it with the marinade already on it…so easy to whip it out next time you need it.)

Fill 6-8 tortillas with shredded cheese and equal portions of the chicken mixture.

Spread a layer of green enchilada sauce in the bottom of a 9×13 pan (sprayed with cooking spray).

Roll up those tortillas nice and tight and place them open-tortilla-flap down in the pan.

Spread another layer of enchilada sauce over the top:

Then sprinkle the remaining cheese over the top (and don’t let it fall off the counter which it looks like it’s about to in that picture up there…rest assured it made it safely to the oven).

Serve with a little sour cream if you like that kind of thing. 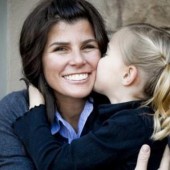